Kelly George is recognized for the Criminology Outstanding Thesis “Examining the Influence of Police Officer Rapport on Mock Witness Memory,” a thesis which sought to understand if rapport affects the accuracy of witness memory. George’s undergraduate and graduate degrees are in criminology, with an emphasis in Forensic Behavioral Science. She says she chose this field because she had a high school teacher who was a retired police officer, and she enjoyed attending his class every day.

“I learned all the basics in that class, which gave me a strong understanding for the more complex ideas I would later encounter at Fresno State.”

How did your academic journey at Fresno State begin?

I chose Fresno State mainly because of how great the Criminology program is, so as an 18 year old, I embarked on my educational journey here and it has been the best decision. Luckily, I had applied and got a job at the DISCOVERe center the summer before my first fall semester. There, I was exposed to older students that offered me advice and showed me the ropes. Shortly into the fall semester, my boss at the DISCOVERe center recommended me for a job in the Vice President for Administration office. I applied, interviewed, and later received the job. Only three months into my freshman year, and I was working in a very busy and challenging office. However, I was up for the challenge. I would stay in that job throughout my undergrad and grad school education, which was just about 5 years in total. Then in the summer between my freshman and sophomore years, I was asked to be a part of a Criminology professor’s research team. That’s when I met with Dr. Kieckhaefer and eventually spent the rest of my time at Fresno State as a research assistant on her team and eventually writing my thesis with her.

What is your career goal?

I always wanted to be an agent in the FBI or the DEA since I was in high school. Hopefully in 10 years, I have begun working for either of those federal agencies and have had the ability to travel. I may also want to get a doctorate in psychology within the next 10 years. There are endless possibilities in the field of Criminology, and I hope that I find the path that is right for me.

What do you think about the College of Social Sciences (COSS) and our professors?

I think the COSS and its professors are dedicated to the students and their learning. It also seemed important that they prepared us for futures in our careers. The COSS was always sending out job announcements or job fair information, providing us with really great speakers, and giving students the support system that we all need while in college.

Did you experience any challenges as a student?

My parents and my whole family were very supportive while I was a student. I was able to balance two jobs (one on campus and one taking care of kids) with a full time school schedule, but I would have never been able to do that without such a strong support system. There were a few days or weeks even where it felt like I had taken on too much, but in the end, it was all worth it.

What is your most memorable experience at Fresno State?

I had two very memorable experiences at Fresno State. One was being a research assistant, and having the opportunity to travel to many places to present research I was working on. Second, I was given the responsibility of facilitating the President’s Showcase of Excellence while I was a student assistant in the Vice President for Administration office. I worked on that event for five years from its debut in spring 2015 to 2019, and each year brought on new challenges, but it was the one of the best opportunities I had at Fresno State.

How do you feel about being recognized as an outstanding student?

It feels great to be recognized as an outstanding student, but it was also shocking to me. I typically kept to myself and was quiet in classes so I could focus on my work and keeping my eye on graduation. I spent a lot of time on my thesis, and it feels great that it is being recognized as well.

What is your advice for other students?

I think it is important that students make connections with their professors early on and take any opportunity that is presented to them. College is about finding your strengths, preparing you for your future, and learning to network. I have found that everyone on the Fresno State campus is willing to help as long as you reach out and ask them. That’s the best thing about Fresno State, it always seemed that everyone was on your side and wanted success for every single student on campus. 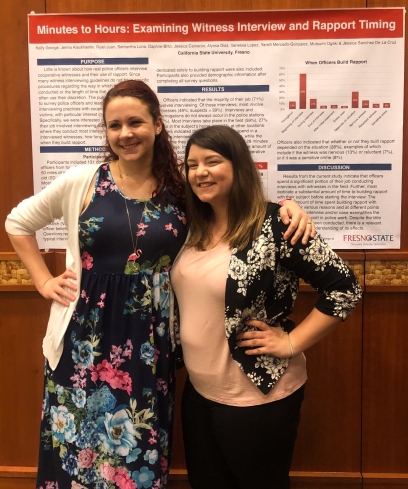 Tell us about your thesis, why did you choose the topic?

My thesis sought to understand if rapport affects the accuracy of witness memory. We wanted to see how accurate witnesses were in recalling the details of a mock crime video when the officers interviewing built rapport or did not build rapport. Studies of this nature have been conducted previously, but this study included real police officers interviewing witnesses (Fresno State students), and the interviews between officers and students took place in actual police stations. I chose this topic because it was a topic that I had been exposed to already as an undergrad working with Dr. Kieckhaefer, and I loved learning about eyewitness memory.

“I would like to thank Dr. Kieckhaefer, my family and friends, and everyone from the VPA office. Without all these people, I would not be where I am today. Dr. K encouraged me to attend this Master’s program, get over my fear of public speaking at multiple conferences, and helped me along the way to be a great student and researcher. My friends and family always supported me in anything I wanted to do, and they were there when I needed a break or when I needed to think through a paper topic aloud. Everyone in the VPA office, Kathleen, Debbie, Esther, Diana, Pam, Lisa, Jean, Sue, and Kris, were always encouraging and were so happy to see me going to the conferences and writing my thesis. They took me in as a shy freshman, and were instrumental in me gaining my confidence to be a great student and hard worker.”