When the Holy Sisters of the Gaga Dada was named “Best Underground Band” by the LA Weekly in 1987, then-bass player/singer-songwriter and current Jewish Studies program coordinator and professor Dr. Jill Fields had little interest in leaving her post-punk band behind to pursue a career as a historian and professor.  But through fateful synchronicity, Fields was guided down an academic path and is currently one of the longest-serving female faculty members in the College of Social Sciences.

As the opening act for bands like the Red Hot Chili Peppers and Jane’s Addiction, Fields was enmeshed in the music scene, playing gigs with her band in clubs from San Diego to Vancouver.  However, the road was rougher for female rockers in the mid-1980s. The manager of the Holy Sisters, who had worked with reggae bands before taking on the Holy Sisters, explained, “all-white boy bands” were much easier to book.

After a major label A&R guy saw the band at the Whiskey and decided the label would sign only one all-girl band at a time, Fields began exploring alternatives.  She got a job as a scholar’s assistant at the Getty Center in LA for their visiting scholars program. Having already graduated with her bachelor’s in History and Women’s Studies, Fields was ecstatic to meet eminent academics like Eric Hobsbawm, a historian whose work she had read as an undergraduate.

“That particular year, the Getty Center hosted a number of prominent anthropologists,” Fields said.  “Honestly, with my experiences being a musician, I thought maybe it’s time to be practical and was inspired to start thinking about graduate school.”

Fields was accepted to USC’s public administration program and quickly realized it was not a good fit for her.  As she wandered down the aisles of the campus bookstore, Fields bumped into a student in the history section.

Although the student was not a history doctoral graduate, he was hoping to convince his advisor to get into the Ph.D. level class.  Though he wasn’t successful, Fields was after meeting with history professor Steve Ross, who invited her to attend the second meeting of his graduate seminar on US social history the next day to discuss Oscar Handlin’s classic The Uprooted.

“I had missed the first week, so I just stayed up all night reading the book,” Fields said.  “I went to the class and I realized, ‘Okay, this is where I need to be.’ Once I decided to go for the history Ph.D., I knew I wanted to be a professor to teach and do research.”

While in graduate school, Fields became a part-time lecturer at Cal State LA and Cal State Long Beach.  Upon graduation, Fields was offered a one-year position at Arizona State University but once there, was adamant about returning to California. Synchronicity would again guide her, this time to Fresno State.

“My mom was on Mayor Bradley’s executive staff all twenty years he was mayor and took a flight to Chicago on city business.  She didn’t often talk to people she sat next to on the plane, but she did on that flight,” Fields explained. “She found out she was sitting next to a history professor from Fresno State and mentioned I was a historian looking for a job.  He then told her that there was going to be a job opening at Fresno State.”

Fields waited for the job posting to appear and when it did she applied immediately. It was the late 1990’s and as a female historian conducting research in women’s history and popular culture, she was aware of the challenges she’d face.  The significance of research about feminized aspects of popular culture was not fully appreciated by many academics at that time, and was often dismissed as trivial by mainstream critics and scholars.

“I did feel that some of male interviewers at the American Historical Association Conference and on campus follow-ups were rather skeptical that my work on the history of fashion and lingerie was serious scholarship,” Fields said.

After several interviews, Fields was hired to teach American History and Women’s History at Fresno State and joined a department with far fewer female faculty members in the College of Social Sciences than we have today. 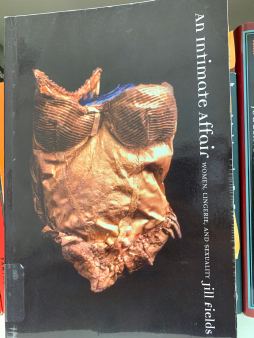 In 2007, she published her first  book, An Intimate Affair: Women Lingerie and Sexuality, and next edited a collection of essays Entering the Picture: Judy Chicago, the Fresno Feminist Art Program and the Collective Vision of Women Artists. Other publications include articles on fashion and popular culture, and more recently in Jewish Studies.

In 2012, Fields launched the Jewish Studies program, including creating new classes such as Jewish Studies 100W and Jews in American Film, which have become central to her course offerings each semester. Yet she has still maintained her research agenda.  “I love doing research and publishing it. I just had an article published on Jewish identity in the Netflix series Orange is the New Black,” Fields said.  “I’m always thinking about new projects when I can find the time, but I want to keep developing the Jewish Studies program to ensure it’s as solid as possible.”

At Fresno State, Fields has worked on a lot more projects than she initially thought she would twenty years ago, including organizing a Jewish Studies lecture series, creating the Jewish Faculty and Staff Association, and serving on the President’s Jewish Leadership Council.

Now with more women in leadership roles on campus, Fields believes there is greater acceptance of feminist perspectives. “Here’s one way we can think about this: the percentage of male students taking women’s history has increased over the time that I’ve taught it, and I think that’s excellent,” Fields said. “It’s always been in GE, but there were very few male students who were interested in women’s history when I started twenty years ago.  Many female students find learning about women’s past struggles and accomplishments empowering, and experience my classes as places where they can express their perspectives on their own lives as women. It’s rewarding to witness Fresno State students making connections in class between the past we are studying and their present reality, whether the topic is Jewish garment workers in early twentieth-century America or body image in the early twenty-first.”