The College of Social Sciences offers a broad and exciting range of majors, minors and certificates that prepare students to take their place in a rapidly changing world.

This semester, the College welcomes seven new faculty members that contribute to the continued success of four of our departments: Criminology, Women’s Studies, Africana Studies and Chicano and Latin American Studies.

To better introduce these new faces to the rest of the College, we caught up with our new faculty members for Q&As, which we will be sharing with you in the coming weeks.

Dr. Leece Lee-Oliver joins the Department of Women’s Studies as an assistant professor as well as the American Indian Studies Program as the director. Lee-Oliver comes to Fresno State from San Francisco State and Mills College.

Question: What are you most looking forward to here at Fresno State?

Answer: Developing an interdisciplinary American Indian Studies Program, teaching in a program grounded in feminist praxis and ethics, working with students and colleagues and engaging in community work.

Q: How did you become involved in your specialty area?

A: First, life experience and growing up as a mixed-race child of a civil rights activist enlightened me to the realities of political, economic and social injustice and to institutionalized racism and sexism. It also taught me the ethic of responsibility in that members of society have the right and responsibility to get involved and work to create positive social change. As an adult, I have worked in American Indian community efforts to achieve equality through advancing the educational representation of, access, and services to American Indian communities. Training, outreach and services include providing administrators and teachers training on how to incorporate culturally respectful and accurate representations of American Indians into curriculum and campus environments. This work has been coupled with efforts to build American Indian community-campus relations; and, I volunteer in developing and providing American Indian youth mentorship programs and services. Much of this work has been done in collaboration with American Indian elders, community leaders and feminists whose lives are dedicated to achieving equal access to education, employment and rights over our personhood. Feminist ethics that foster alliance-building and decolonialism have inspired me to engage in a great number of collaborative projects between American Indian women activists and feminists more broadly. My ethics as an educator and activist are defined by the work of American Indians, women of color and western feminists.

Q: What will your distinctive background do to elevate the Women’s Studies offerings here at Fresno State?

A: The program attracted me because it is fantastic, diverse and rigorous. I bring American Indian women/queer peoples into the fold of our studies of U.S. and transnational feminisms. My work expands the program’s angles through which the social constructions of sex, gender, race, sexuality and agency may be examined with respect to the indigenous women and women of color more broadly.

Q: When are your office hours?

A: This fall, 1-2 p.m. Wednesday and Fridays, and by appointment.

Q: What’s a fun fact that people might not know about you?

A: I was among the young women who kicked off third wave feminism through punk/heavy metal music. Like those who used zines to talk about politics, art, music and liberation, I co-published and edited a magazine/zine. When I started, I was the youngest and only female owner/editor of a major full-scale, international music magazine. 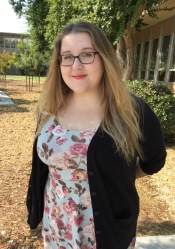 Fobear’s research revolves around refugee settlement in North America for those claiming asylum on the basis of sexual orientation and/or gender identity. She uses participatory photography, oral history and community-based art projects to explore sexual and gender minority refugees’ stories of settlement. Through storytelling and art, Fobear works with sexual and gender minority refugees and newcomers to share their story and fight for social justice. Fobear’s work has been published in Refuge, Studies in Social Justice, Journal of Homosexuality, Peace Studies Journal, Journal of Human Rights Practice, Journal of Feminist Scholarship, Social Alternatives and Women’s Studies International Forum. In addition to her research, Fobear has worked for several non-profit organizations focused on lesbian, gay, bisexual, trans, and queer rights, stopping gender violence and anti-racism.

Question: What are you most looking forward to here at Fresno State?

Answer: Supporting the active LGBTQ community here at Fresno State and the city of Fresno. Building new opportunities for research and community collaboration around immigration rights, LGBTQ rights, housing and anti-violence. The opportunity to develop new courses for our Women’s Studies Program focused on LGBTQ studies and queer studies.

Q: How did you become involved in your specialty area?

A: I have worked in several organizations in the U.S., Canada and Europe on LGBTQ rights. For the past six years, I was a settlement volunteer for Rainbow Refugee—a volunteer organization based in Vancouver, British Columbia dedicated to supporting and advocating for those claiming asylum on the basis of sexual orientation and gender identity.

Q: What will your distinctive background do to elevate the Women’s Studies offerings here at Fresno State?

A: I bring with me not only expertise in LGBTQ studies, histories and critical queer theories, but a long history of working with community organizations and doing community-based research.

Q: When are your office hours?

Q: What’s a fun fact that people might not know about you?

A: I went to school to be a forestry major and become a park ranger. But, I got queerly sidetrack along the way! I am still a big outdoors fan and I love that I am so close to such amazing parks.