Cuba’s criminal justice system, history and culture were among the topics 18 Criminology students learned about first hand during the study abroad program in May 2017 in Cuba.

After much planning and fund approval, 18 participants which included students, Dr. Bernadette Muscat (Interim Associate Dean, College of Social Sciences) and Professor Bob McDonald (Adjunct Faculty, Department of Criminology) traveled to Cuba on May 22, 2017 for what is known as a “People-to-People” exchange.

“As a professor of Latin American history, I saw this trip as an opportunity not only to see the great city of Havana, but also to take the pulse of the Cuban people and get a sense of what some of them may think about the recent dramatic changes in their country, including its rapidly changing relationship with the United States,” Dr. William Skuban said.

Dr. Skuban described the Cuban people as being optimistic, longing for a more normalized relationship between the United States and their country, yet wanting the relationship to be one of cooperation between equal partners.

The first day in the Havana began with a lunch in Central Havana at an authentic Cuban restaurant, a “paladar.”  There, students learned “paladars” were owned by the Cuban government whereby they distributed a limited number of licenses to families to open their homes for patrons.

Participants also heard from the Director, Jorge Bodes and Jose Candia who served as attorneys, judges, and professors during their long careers. With their tour guide serving as an interpreter, students had an open discussion about the criminal justice system within Cuba, inquired about the judicial process, law enforcement, offenders’ and victims’ rights, juvenile justice, family violence, and human trafficking. Students described it as a fascinating discussion to compare and contrast the differences between the two systems.

“Interacting with some of the Cuban locals, having a meeting about their judicial system, and walking around and exploring the culture heavy communist country is what I enjoyed most on my trip. I myself often take living in a free country for granted. Cuba helped me appreciate the little things we are fortunate enough to have such as clean water, freedom of speech, and wifi!” Erika Ramos said.

After the presentation, the group went to the “Hotel de La Nacional” for check-in and had a brief orientation of its history and significance. They were presented with a welcome mojito and learned about the hotel, which opened in 1930 and was one of the prominent hotels for Americans prior to the embargo.

A trip to the “Museo de la Revolucion” followed and left indelible impressions on the participants as they walked through each of the levels of the museum learning about the architecture of the building and individual rooms. Walking through each room and floor of the building, they chronicled each of the decades prior to, during, and after the Revolution. After the tour, the group was given adequate time to explore the museum on their own.

Once finished, they drove to Habana Compas Dance, a privately funded local dance troupe that focuses on a fusion of Cuban, African, and Spanish dancing and percussion. The group was given a brief history of the dance troupe, the studio, and the performances that they have given throughout the world.

The following day, the group went on a historical walking tour of Old Havana where they had an opportunity see the beautiful architecture of this part of the city. Participants learned of the history of the various structures including, statues, palaces, churches, houses, parks, and piazzas.

“There is rich culture and vibrant colors used in their crafts, I learned so much. From the history to the type of foods commonly eaten. My experience is something others should experience, if given the opportunity. I gained a new understanding of the culture, politics, criminal justice system, and of the US Embassy in Cuba,” Jose Cruz said.

The learning experience continued on the participant’s final day in the Havana which began with a tour of the American Embassy. Once the group cleared security, they convened in a classroom to learn about the history of Cuba, Cuba-U.S. Relations, the efforts to further expand diplomatic relations with Cuba, and security while in the host country. The briefing was detailed and thorough given the limitations of what can be shared pertaining to these matters.

The group took a short bus ride through the Havana learning about its history, various neighborhoods, and beautiful architecture on their way to the “Museo de Bellas Artes,” where they were met by a docent who walked them through several floors to see artwork including free standing art, paintings, and sculptures. The docent explained the history of the museum, as well as the artwork and how each coincided with a particular historical period. 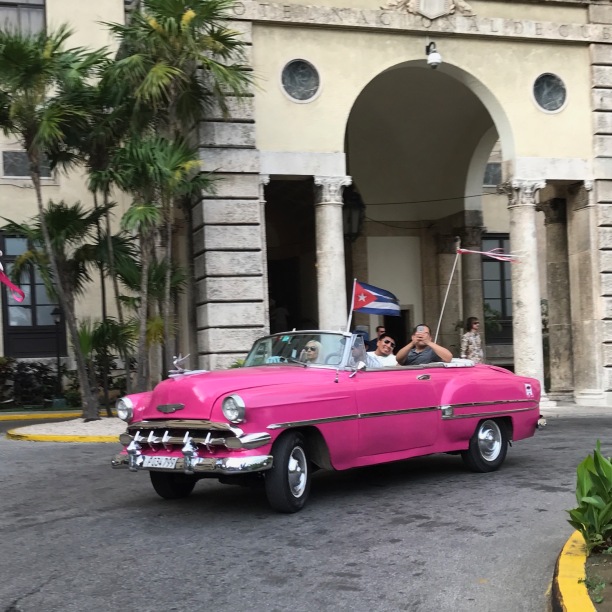 Students ride in classic taxis to a farewell dinner 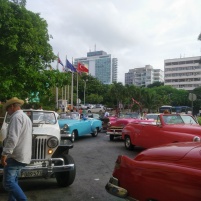 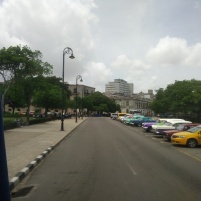 “The challenge of a very short trip like this is to try to see below the surface of these ‘people-to-people’ encounters. One easily senses the national pride that Cuban people possess, and much of that pride stems from the fact that their country and its revolution has stood its ground in the face of a fierce and frequently misguided U.S. foreign policy. On the other hand, it is true that the Cuban state continues to impose many political and civil restrictions upon its people that would be unconscionable for the vast majority of people in the United States,” Dr. Skuban said.

Participants described the trip as an excellent program filled with a wealth of information and many opportunities for discussion and comparative analysis throughout.

“This was a once in a lifetime opportunity that was enjoyed immensely by all participants. We trust that this study abroad experience will have a positive impact on their studies at Fresno State and future careers within the criminal justice system,” Dr. Bernadette Muscat said.

Of the 18 students, 11 received $1,000 in IRA funds, 10 received $250 from COSS funds, and 10 received a total of $1,250 in both IRA and COSS funds. Without these funds, students would not have been able to attend and the program would have been cancelled. Even with these funds, student participants struggled to pay the full amount of the program and several asked for extensions, which ultimately (with much negotiation) was granted.

Participants would like to thank the Division of Continuing and Global Education (DCGE) for their assistance in developing this program and are extremely grateful to both DCGE and the College of Social Sciences International Education Committee for their continued financial support for students to attend this study abroad program.